Magnus Andersen, former East Central College player and NJCAA All-American 3rd Team selection in 2017, is doing what he has always done over his four-year college playing career and that is carry his team with his tremendous work ethic. Andersen in his senior season at UM-St. Louis was named Great Lakes Valley Conference Player of the Week http://www.umsltritons.com/news/2019/10/14/andersen-named-glvc-mens-soccer-offensive-player-of-the-week.aspx?path=msoc  and the United Soccer Coach NCAA Division II National Player of the Week http://www.umsltritons.com/news/2019/10/15/mens-soccer-andersen-named-united-soccer-coaches-dii-national-player-of-the-week.aspx?path=msoc during the week of Oct. 13-18.

Andersen was able to register 8 points in two GLVC matches with the game winner over NCAA DII #2 ranked Maryville University. He also scored three goals in a 4-3 OT loss to Missouri S&T.

On top of that great week, he put another exclamation point on his senior season as he scored the game winner in the 60th minute the following week for the University of Missouri St. Louis to beat Rockhurst University 2-1.

Majoring in business at UMSL, Andersen hopes to continue his playing career after graduation somewhere at the next level and use his degree to start his career. 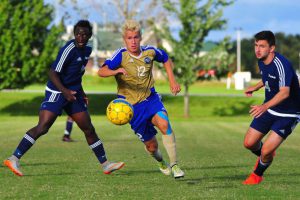