ECC Softball (9-6-1) has been able to lift themselves to another level with timely hitting and good pitching. This has been proven in a double header sweep of Missouri Baptist JV by scores of 11-1 and 10-5.  The first game was highlighted with hits coming from Dani Kimminau as she went 3 for 4 with two doubles sand two runs scored. Ashleigh Damazyn went 2 for 4 with three RBI. The hit parade was rounded out by the following all collecting two hits each: Nikki Abbott, Jenna Crider and Lily Prichard.  The winning pitcher was Haley Schulte and for the second straight game she struck out 11 batters.

The second game of the double header was contested with a little more run support from the Spartans, but the Falcons were able to weather the hits and provide some fire power of their own. A big performance from the plate had Maddie Greco collecting three hits with a triple, home run , 6 RBI and 3 runs scored.  Dani Kimminau and Nikki Abbott had big second games as well. Kimminau went 4 for 5 and Abbott went 4 for 4.   Addie Konkel got the win from the circle to elevate the Falcons to three games above .500.  A good start to the week has sitting at ECC 3-1 with another double header scheduled for Thursday, April 1 against State Fair Community College in an MCCAC conference game. 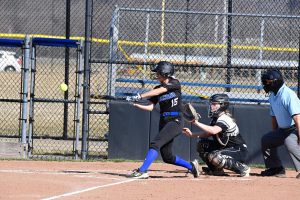