Another double header sweep went down to the end as he Falcons found their back against the wall in the first game ever played against State Fair Community College in Sedalia, Missouri. ECC was down 3-1 with two outs and two base runners in the seventh inning as Jamie Kluba was down to her last strike. After a near hit was called foul by the umpire, Kluba launched the eventual game winning three run homer to take a 4-3 lead. Abby Ray got the win in relief to improve her record to 4-1.

Coach Wallach and the Falcons decided they had enough drama in the first game, so they took care of business in the second game winning 11-1. Jordan Vrba had a two run homer and Jensen Crenshaw added to her home run total with a solo shot over the fence. But it was Jamie Kluba again with a massive three run homer again to give her eight total runs batted in on the day. Ashley Miller looked good from the circle as she fanned five batters and only gave up four hits in her first collegiate victory. 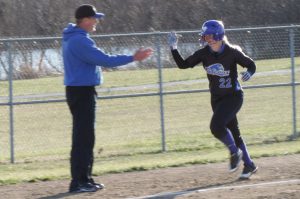