Sophomore team captain, Magnus Andersen was named to the 2017 NJCAA Men’s DI Soccer All-American 3rd team for his performance on the field for the East Central College Soccer Falcons. As a second year player Andersen was able to put the team on his shoulders at times when the Falcons were looking for a scoring opportunity to win games. His connection with his teammates almost seemed like he possessed telepathy at times. He assisted two-year teammate Zach Druhe on four corner kick goals during the season as the two team captains were on the same page attacking the opposition’s net.

Scoring 10 goals and adding 13 assists was proof he was a team player to the ultimate level. His freshman year he registered 6 goals and 10 assists to boost his overall totals.  His 23 total assists place him #2 all time in the ECC career charts and #3 for a single season with 13 from this season.

His assist in the last regular season home game was joy to watch as he pulled some magic out of his bag of tricks 27 seconds into the match. He intercepted a second pass from a Northeastern Oklahoma A& M player during a center off and dribbled through three more players to then place the ball to Ralph Joseph for an easy tap-in past the NEO goalkeeper. The opposing team was as stunned as was everyone in the stands with Andersen’s cheeky play.

Hailing from Köge, Denmark just outside of Copenhagen, Andersen was able to hone his skills in a soccer rich environment with his club FC Köge during his youth playing days. As a midfield maestro, Andersen has been a catalyst to the Falcon attack for two years, despite his club team not having a great record in his last season back in Denmark. He has a very high technical ability and vision of the field. Along with great field vision, his fitness levels have been a key component to his high level work rate going from box to box for 90 minutes each match.

As he finishes his degree at East Central College, he hopes to complete a bachelor’s in business and is being recruited by NCAA DII and DI schools across the Midwest. As he makes his final decision where he will play next year, he will be bringing along his intelligence in the classroom. His freshman year he received MCCAC, Region 16 and NJCAA academic honors as well as being named MCCAC 2nd Team All-Conference. 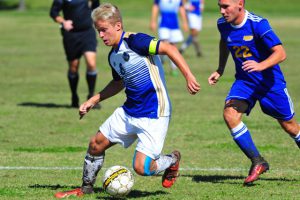