Another sophomore Falcon has found new home to roost for their junior season. Samuel Marchi a native of London, England has signed with William Penn University in Okaloosa, Iowa. The men’s soccer program was 15-5-1 last season and made their way deep into the NAIA post season. Marchi who played two years as a left back for the Falcons hopes to crack the starting 11 on a very deep squad for his junior season.

While at ECC, Marchi started in 25 matches and played in 28. The ECC soccer team went 17-10-4 over his two years in Union, Missouri. His athletic ability and speed are his strengths that make opposing attacking players wear down over the course of a 90-minute match. There were many games where he used his quickness to track down speedy strikers to keep opponents at bay. 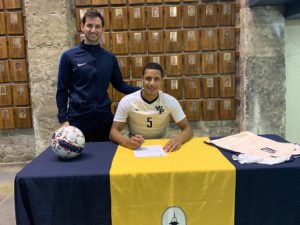