The 14-2 Falcons sent Culver Stockton JV home with two losses after a pair of duplicate scoreline 5-4 wins over the Wildcats. Walk off home runs are a nice way to win games in extra innings, but dramatic wins aren’t always good on the blood pressure. ECC was up 3-0 in the 1st inning after an Eden Henry RBI single and Ashley Miller’s 2 RBI single. Jamie Kluba sent a towering homer over the left field fence to make 4-0 in the 3rd inning. Culver Stockton answered back after a couple of errors in the 4th inning loaded the bases and led to a game tying grand slam at 4-4.  The game went to extra innings and Megan Micke launched a shot over the centerfield fence to walk off in style.  Abby Ray came in relief to get the win for the Falcons.

The second game had ECC up 2-0 with an Ashley Miller two RBI double in the first inning. Micke hit a triple and came in to score. The Falcons were down 4-3 and made a comeback in the 4th inning on a string of small ball plays with bunts and pass balls to advance the runners and score two runs. Makala Trail picked up the victory going the distance pitching for ECC. 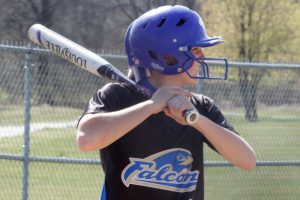 Megan Micke at the Plate