ECC Soccer took to the road and headed to Sedalia, MO to take on State Fair Community College with a match that had Region 16 and Missouri Community College Athletic Conference implications. The Falcons, 10-3-1, were not able to bring home a road victory. Instead the Falcons had to settle for a 3-3 two overtime tie with the Roadrunners. ECC outshot State Fair 14-6, but it was the Roadrunner goalkeeper who kept the match close making saves to thwart the Falcon attack. Ralph Joseph supplied the fireworks as he recorded his first collegiate hat trick with three goals in the match. The assists were courtesy of his teammates Alex Stojov, Rudy Gonzalez and Joel Konteh. Other chances stopped included an offensive flurry from Juan Bolivar as he had five scoring opportunities just miss or get saved by State Fair. 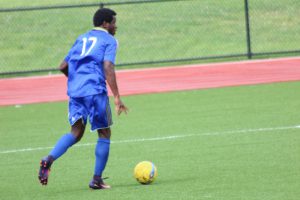 Ralph Joseph On The Move