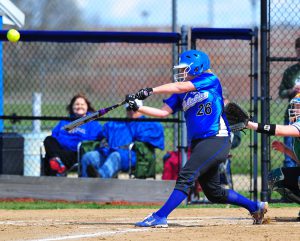 Shelby Friend, sophomore outfielder and pitcher, was named a 2nd Team All-American by the NJCAA last week when the DII Softball All-Americans were released from the national office in Colorado Springs, CO. Friend was able to put an exclamation point on her stellar two year career as a Falcon being named an NJCAA All-American!

As a freshman she set the single season home run record with 13 and duplicated her home run production her sophomore year with 13 becoming the career home run leader in the ECC Softball record books. Friend ends her career being a two-time 1st Team All-Region selection and she was also a 1st Team All-Conference selection her sophomore year. She was able help propel the team to a Region 16 Championship her freshmen year. This past year the Falcons finished with another winning season, but fell short in the region tournament.

Stolen Bases: 4th in single season with 16
4th in career with 25