Union, MO– The Falcons keep transferring sophomore student athletes to four year schools with good academic and athletic scholarships.  McKenzie Struckhoff is one of the latest after her signing with Missouri Valley College to play volleyball on the western side of the state next year. Last year’s Missouri Valley College squad was 33-11 earning a trip to the NAIA National Volleyball Tournament. Struckhoff hopes to continue her athletic career with a quality program while finishing her undergraduate degree.

A team captain and statistical category leader for the Falcons, Struckhoff started two years for ECC as an outside hitter. She garnered 1st Team All-Conference and 1st Team All-Region 16 honors her sophomore year. She was also selected 1st Team All-Region 16 and 2nd Team All-Conference during her freshman season in the MCCAC. Her stats were impressive as she has entered the record books and ranks 5th all-time for a career in kills with a total of 650. Her sophomore numbers of 379 kills ranks 7th all time for a season in ECC volleyball history.

As impressive as her play on the court was last season, she is an equally good student athlete. During her freshman year, she was named MCCAC Academic All-Conference and Academic All-Region 16. As a high school dual threat athlete, Struckhoff played volleyball and soccer at Duchesne High School before coming to East Central College.

Struckhoff plans in majoring in psychology at Missouri Valley College. 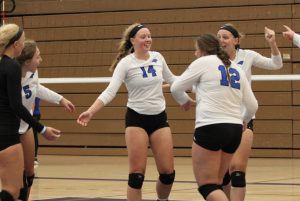 Struckhoff Congratulated by Teammates After Kill