East Central College sophomore striker, Umoh Ufot (London, England) has chosen to pursue his academic and athletic collegiate career at Rockhurst University next fall. Ufot is receiving a combination scholarship for his talents in the classroom and on the field to play for the Hawks.

Rockhurst University is headed by one of the all-time winningest college coaches in St. Louis, Missouri native, Dr. Tony Tocco. Rockhurst was ranked #1 in NCAA DII most of the season in 2016. The Hawks made the NAIA post season 17 times with 10 Final Four appearances and four runner-up finishes before transitioning into the NCAA in 1997. As an NCAA DII member the Rockhurst Hawks made 9 NCAA DII tournament appearances and three final four appearances.

Ufot was named a 2016 NJCAA Region 16 1st Team performer as well as 1st Team All-MCCAC. He finished his career as a Falcon ranked #6 in career goals scored with 25 total, despite only playing four games his freshman year. His sophomore year he tallied 17 strikes to the back of the net to tie him for 6th all-time in school history with his teammate Jacob Moore. He also collected 9 assists his sophomore season leading the Falcons to 10-5-1 record.

As he transfers to Rockhurst, Ufot plans on completing a degree in business with hopes of someday playing soccer professionally in the United States or his home country of England. 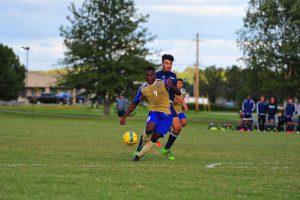